Every now and then the media, or someone I know, or (perhaps a bit ironically) social media users will put forward the argument that digital technologies are making us more stupid, more narcissistic, or less connected with each other. For many this theory might be founded in well-meaning concern for their fellow citizen, or based on articles they’ve read about neurological and psychological changes as a result of technology use. However, I would counter that this is a theory which has sprung from a long history of elitist mistrust in technology and patriarchal structures of power and oppression. Let me explain.

The common criticisms of technology of draw evidence from modern trends: it makes us narcissistic as proven by the proliferation of the “selfie”, it makes us stupid due to the fact that we no longer need to think for ourselves now that we have Google, and our lack of connectivity comes from the idea that our lives online are somehow inauthentic and cannot to be valued as highly as “real life” experiences.

However proponents of this argument neglect some truths:

They ignore the creativity which has been enabled by digital technologies: from inspired uses of artificial intelligence and virtual reality, to the rise of digital arts such as illustration, animation, and game creation. Musicians, film-makers and pod-casters can self-publish at little cost and crowd-funding allows exciting ideas to become reality without the compromises and red tape imposed upon them by investors. Many new job types have been created by digital media – jobs which unarguably demand high levels of intelligence, creative thinking and problem solving by those who fill them.

They ignore those who are now able to connect with others in unprecedented ways, including such high-profile mass-movements like the Arab Spring, Occupy Wall Street and #BlackLivesMatter. Beyond these powerful examples of online connectivity, the daily experiences of individuals, who use online spaces as a safe place to gather, to communicate and to be themselves, shows that for some of users, digital technologies create and enhance a sense of community they may not feel in their offline lives.

They ignore the fact that we have more access to more information than ever before. Yes, there is a lot of misinformation out there, but surely that is an acceptable trade off for being able to instantly access vast databases, academic research, and innumerable eBooks, reports, essays and more, without having to leave your home. This has enabled many to achieve things they would not ordinarily be able to, for reasons including, time, money, geography, social pressures, personal anxieties, injury, family priorities and more.

Recently I completed a postgraduate degree online; a feat I would never have been able to accomplish while working full time in a suburb far from any university campus which offered my particular course, had digital technologies not made it possible. I hope the degree made me smarter; but at the very least, it provided me with new information and skills, and connected me with others who held the same interests, some of whom I have formed what I hope will be lasting relationships with.

You may claim that this is an anecdotal example which, rather than countering criticisms of technology, serves only to illustrate my own privilege: that the vast number of people do not use digital technologies to enhance their lives, but instead use it to waste their lives; and that online study is reserved for those who enjoy the luxury of being able to afford it and who are equipped with the tools, such as an internet connection and computer, to use it. So let’s talk about privilege for a moment.

It is absolutely true that digital technologies are limited to those who have access to them: those who can afford a computer, tablet or smartphone, who live in a country which allows access to network connections freely and has invested in the infrastructure to do so, and who are culturally and socially permitted to use such technologies.

Only around 40% of the world’s population has an internet connection. 48% of those internet users are in Asia, which is unsurprising, given that this region also has the highest population density. The largest number of users come from (again, no surprises here) China and India, however internet users only make up 51% and 27% of those countries’ populations respectively. In the USA on the other hand, which is the third largest online population in the world, users make up over 88% of its population. Lesson learned: a high number of users definitely does not mean a high penetration of the technology.

GDP per Capita vs Internet Penetration 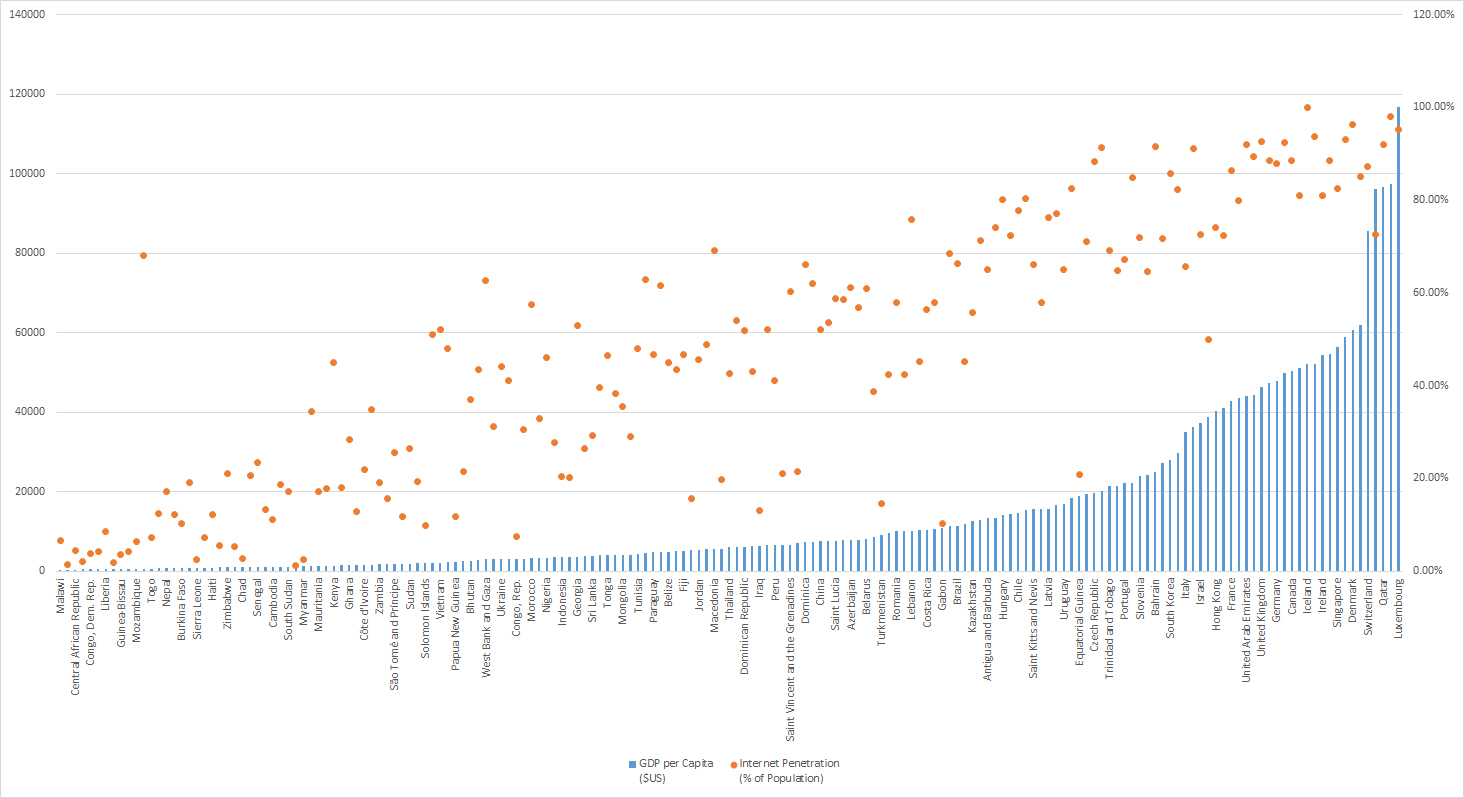 (Sources: 2014 GDP per capita via the World Bank. Internet penetration as per www.internetlivestats.com. An internet user is defined as someone who can connect to the internet at home from any device.)

In addition to the unequal global distribution of internet access, Doubling Digital Opportunities, a 2013 Broadband Commission report in conjunction with the ITU and UNESCO revealed that there are around 200 million fewer women online in the world than men. The gender gap is particularly noticeable in developing countries. For example, the ratio of male to female internet users in India is 6:4. In countries such as Egypt, Kuwait and Saudi Arabia, women make up less than a fifth of all smartphone users. Data from a 2010 gender breakdown of Facebook users in Arab countries shows that the average ratio of male to female users in Arab regions is 2:1, unlike global statistics, which show that women are the small majority of Facebook users.

I don’t want to dwell on the political, cultural and social issues which likely have a hand in some of these figures, since I am no expert in the issues faced by developing nations. These issues are further complicated by deliberate censorship and monitoring of internet use in some countries, most notably China’s Golden Shield Project. However I put forward this data as an appreciation for the fact that there exists a very definite global digital divide, and that digital technology has not been some sort of democratizing panacea. Access shapes its use, and those who cannot access it will not be able to influence its future.

So yes, there is privilege. And I am privileged to have been afforded the opportunity to study, because of my income, my geographic location and socio-cultural situation. However it cannot be denied that for those who do have this access, digital technologies have opened up a whole new world of education, research and inter-personal communication. Take libraries for instance. 20 years ago, if you lived close to one and were able to fulfill the requirements of membership, you had access to that particular library’s catalogue of books, magazines, newspapers and journals – perhaps even microfiche and rare text collections. Today I can become a member of most public libraries in my country, and even take advantage of open-access publications and some academic resources overseas.

In this article I have hopefully been able to provide a background to the discussion which will follow; a baseline at which to operate when it comes to investigating whether digital technologies are making us more stupid, more narcissistic, and less connected. The obvious global digital divide could be viewed as both supporting or undermining this claim, however I believe that once we start delving into the segment of the world’s populatin which is able to take advantage of digital technology, that we can uncover proof that this claim is indeed based on elitist suspicion of any new technology and perpetuates patriarchal, oppressive social systems.

In my next article I will explore narcissism, the selfie, and self expression online. Lastly I’ll look at the ways in which digital technology enables connection and elabourate on my claim of elitism.

Agree, disagree or want to contribute to the conversation? Post your comments below.

Hello Virginia,
A Thought provoking article that argues in the affirmative for the social benefits of Digital Technology. not only is DT having the impacts both good and bad that you describe, but its capacity for creating social change is accelerating. Whilst ever our technology is unintelligent, surely it mirrors the good, the bad, the ying, the yang of the society in which it resides. If ever our technology becomes intelligent, if that is even possible, I wonder what then.